Winston Churchill – what does his handwriting say about him?

Success is not final. Failure is not final. It is the courage to continue that counts. Sir Winston Churchill What a great quote. When you look at the handwriting of Churchhill – does the writing match the sentiments? 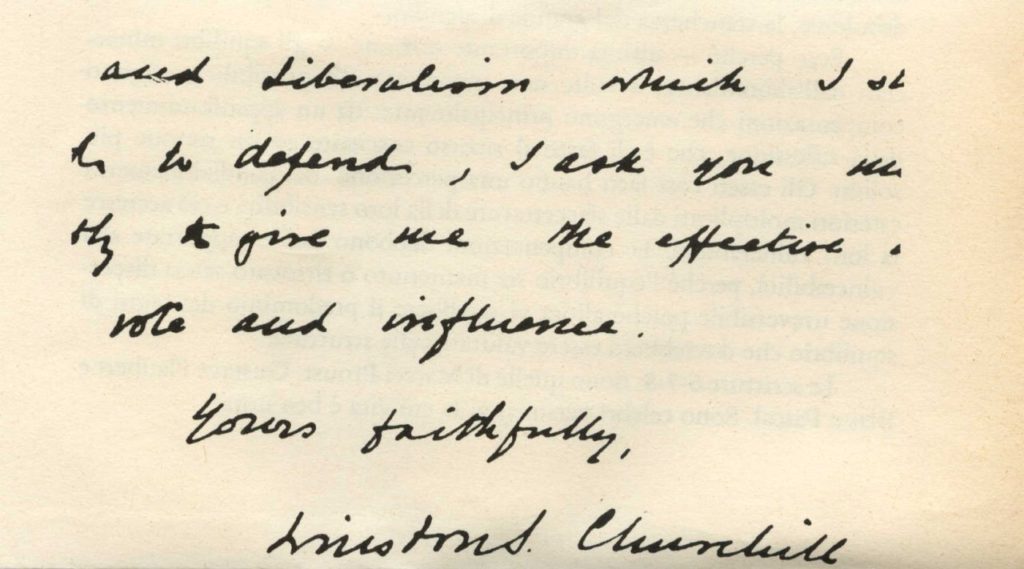 2. I-dots that look like periods.  No slash, but firmly planted and round.  Churchill had a strong sense of loyalty to whatever group or idea to which he linked himself.

3. Notice how the y’s end or link up to the next letter by forming a v-shape to the right, rather than making their way left.  This reveals an aggressive nature.

4. Churchill enters his t’s and even l’s from above rather than from the baseline, which means that he prefers to be spoken to and dealt with in a direct manner.

5. The slant of Churchill’s writing leans toward the right.  He is expressive and highly motivated by his emotions and desires.

Want to learn more? Join us for the handwriting webinar series that starts September 3.

Canadian based Author and Professional Speaker, Faith Wood, is a Communication and Presentation Specialist. She spent 15 years on the front line of law enforcement helping her develop a seamless style of communicating through conflict and crisis that is insightful, efficient and results magical. Her skill as a novelist has helped her craft interactive stories that motivate and inspire and will keep audiences on the edge of their seats. As a hypnotist, she has cracked the code on what it takes to get past resistance and into wider perspectives while adding a bit of entertainment to the content. If you are looking for an engaging and interactive presentation for your next meeting or event, it’s time you brought in a bit of Faith! Offices in Calgary, AB and Coldstream BC.
Book Review: The Mind’s Eye Will you join me at the Global Speakers Summit, Vancouver 2013

Poetry for Believing and Beginning Again

From COPS to CAPS