Using NLP to Get out of Fear 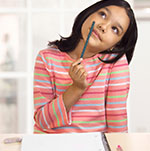 Thomas Edison was known to have said that “Nearly everyone who develops an idea works at it up to the point where it looks impossible, and then gets discouraged.  Sadly, that’s not the place to become discouraged.”

Look around you. Everything you see that has been made by human beings started out as an idea. Start with your computer: every component of that machine began as an idea in someone’s mind. Telephones, cars, houses, chairs, books, MP3s, Netflix: there was a time when none of these existed. There was a time when they lived only as ideas.

When I ran my first NLP Master Practitioner program, one of the exercises involved a person saying a sentence or two about something that they’d like to have some more choices about. Darcy, one of the participants, said something like this:

Darcy told us that she felt that this could be a really successful business idea, and she really wanted to get the benefits from doing it, as well as really help a lot of people, but for some reason she’d spent seven years thinking about it and still hadn’t taken any action.

What do you think was going on for Darcy and how might NLP help her re-think her perspective and light a fire under her desire to take action?

It appears that human beings don’t experience reality directly. Instead they experience a ‘version’ of reality captured by their five senses, then filtered and sorted by internal neurological processes. The version of reality that a person experiences is referred to as their map of the world (MOW).

This MOW includes all their thoughts about the way the world is, the rules they’ve learned in their life, their judgements, beliefs, values, thoughts, memories, imaginings, perceptions and ideas. One of the presuppositions of NLP is that if someone is experiencing a problem, that problem may not actually exist “in the world” – but rather in their MOW.

So, if you want to help someone solve a problem, enrich their MOW.  NLP can provide you with some of the clean questions you will need to start shifting that MOW.

I asked her to describe what she wanted, and she told me. I asked her how she’d know she’d got it, and she said “I don’t know!” I said “Well that seems fair enough, but if you did know, what would the answer be?” She then proceeded to give me an eloquent response to the “How will you know?” question, describing in vivid detail what her experience would be.

Her MOW had been enriched.

How does this work?

In the case of “If you did know, what would the answer be?” it seems to work on the idea that she already knew the answer to the question, but had a minor ‘blockage’ that made her think she didn’t. My sneaky question cleared the blockage, and then everything flowed smoothly.

In Darcy’s case, it wasn’t so simple. She’d been sitting on her idea for seven years, and had created all sorts of unhelpful ideas like:

What the thinker thinks, the prover proves. She’d been thinking these ideas, and had spent seven years proving them true to her inner perspective.

Together we explored these beliefs and the ideas that held them in place, and started to overturn them. We changed what her thinker was thinking, and lo and behold, her prover started proving something more useful and Darcy started taking action.

NLP Tip: Think of something you’d like to move forward with, but have been ‘sitting on’. Then enrich your map to change your beliefs from those which hold you back to those which support you.

Need more help – register today for the Introduction to NLP Training and let me help you develop the tools to create more powerful perspectives – right when you need them the most!

Ladies, is it time to put relax on the ‘To Do’ list? Willing to Change or Protecting those Willful Blindness Goggles?

Why would you train in NLP style techniques?

Its a matter of perspective